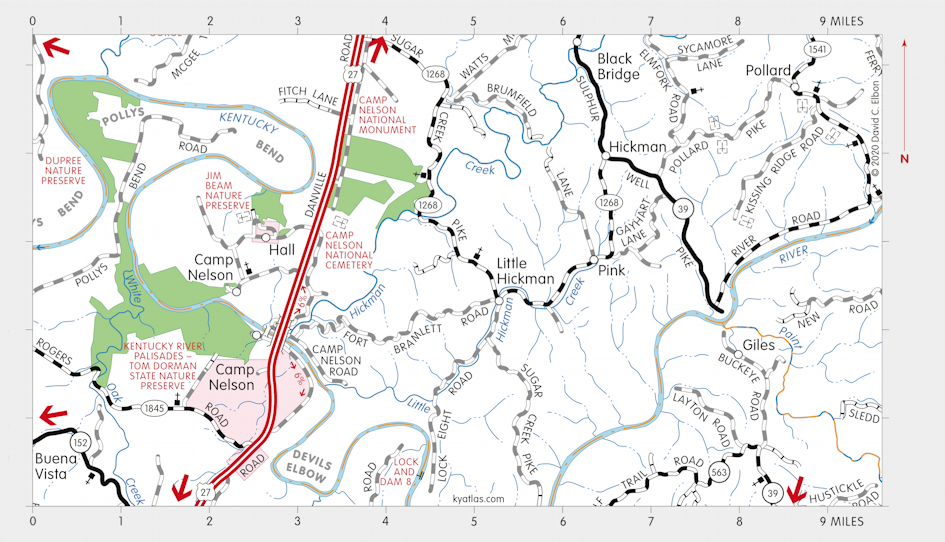 Camp Nelson is a community on both sides of the Kentucky River near the mouth of Hickman Creek about nine miles south of Nicholasville in both Jessamine and Garrard counties. The area was important because a break in the palisades there gave access to a ford across the Kentucky below the mouth of Hickman Creek. The ford was said to be a favorite of Daniel Boone. Early in the nineteenth century it was known as Fitchport for Philonzo L. Fitch who operated the landing. A Fitchport post office operated on the south side of the river from 1839 until 1842. It 1843 a Boon's Knob [sic] post office opened on the north side of the river, named for a hill said to be used by Boone as a landmark. That post office closed in 1849.

A covered wooden bridge was constructed at the crossing in 1838. Known as the Hickman or Wernwag bridge (for its designer, Lewis Wernwag, a noted bridge builder), it remained in use until replaced by a steel bridge in the 1930s. A wider, higher bridge was later built nearby and the 1930s bridge is now closed, although still standing.

The U.S. Army chose the hill on the north side of the river as the location for a camp because it was naturally protected by the river, cliffs, and creek. Named Camp Nelson for General William Nelson, it became an important recruiting and training station for black soldiers and later served as a refugee center for freed slaves. The camp was closed in 1866 and the site is now the Camp Nelson National Monument and the Camp Nelson National Cemetery.