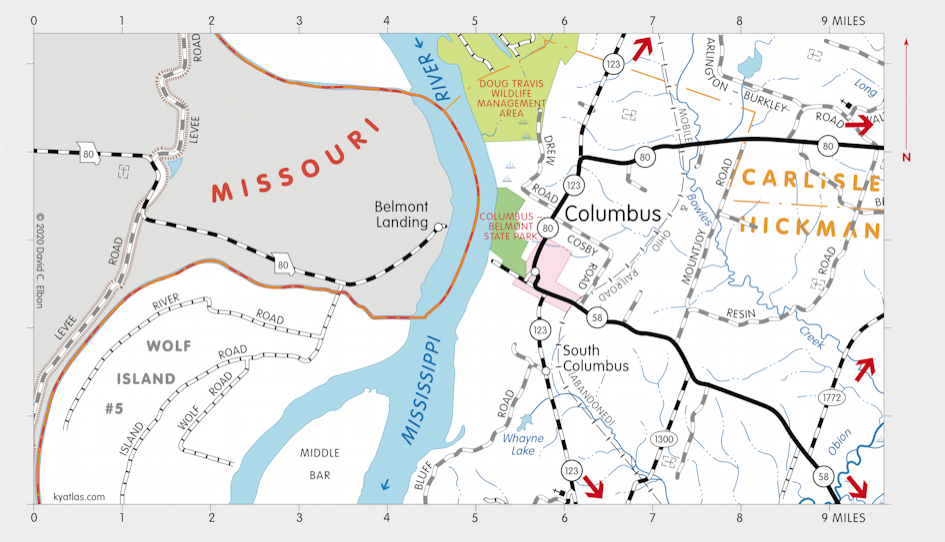 Columbus is a Hickman county city on the Mississippi River about seven miles northwest of Clinton. It was established in 1804 as Iron Banks, named for the bluffs along the river, and renamed Columbus, for the explorer, in 1820. It 1821 it became the seat of newly-formed Hickman county and remained the seat until 1829 when it was moved to the more centrally located Clinton. Once one of the largest towns in western Kentucky, the population peaked at 1,574 in 1870. After the 1927 flood the town was moved to higher ground a half mile from the river. Columbus was incorporated in 1860. The Columbus post office opened in 1820. The population in 2010 was 170.

The Mobile and Ohio Railroad arrived in 1858, its northernmost point for several years. A rail link to a bridge at Cairo opened in 1881. A train ferry across the river operated from about 1883 to 1911. The railroad through Columbus was abandoned in 1975.

Columbus-Belmont State Park, site of a Civil War fortification and battlefield, is in Columbus. The town was occupied by the Confederate army during the Civil War and the fortifications included a large chain stretched across the river to block Union ships.