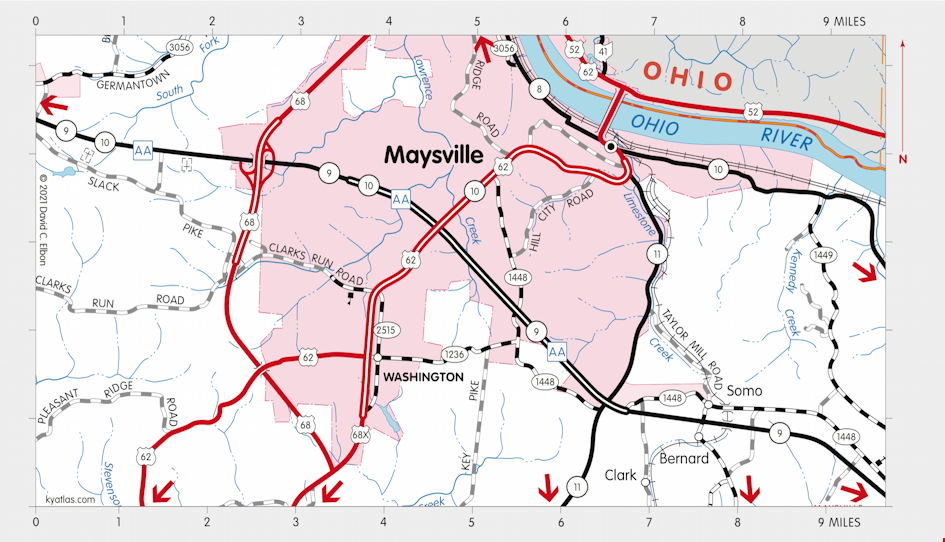 Maysville, the seat of Mason county, is at the confluence of Limestone Creek and the Ohio river. Settlement began in the 1780s and the site was initially known as Limestone, named for the creek. The town was formed in 1787 and named Maysville for John May, surveyor, clerk, and land owner in the area.

The post office opened in 1794 as Limestone and was renamed Maysville about 1799. Both names were in use well into the nineteenth century.

Maysville was incorporated in 1833.

Maysville became an important port. Ferries crossed to Ohio and a road was opened to Lexington by around 1800. Maysville was one of largest burley tobacco markets in the world and at one time was one of largest hemp markets. The Maysville Academy, an early secondary school, operated from 1832 until about 1865.

The Mason county seat from its formation in 1788 until 1848 was nearby Washington, which was annexed by Maysville in 1990.

Maysville is the home of Maysville Community and Technical College.

MAYSVILLE is one of the most important towns on the river, between Wheeling and Cincinnati. It presents, from the river, an unbroken front of elegant brick buildings; the streets are well paved; has a good landing, and appears better from the water, than almost any town on the banks of the Ohio. It contains twenty-eight stores of dry goods, three of them large wholesale ones; one large queensware and china store; four groceries; an iron foundry; an extensive paper mill; a manufactory of stone ware, whose make is superior to almost anything of the kind any where; three large churches, belonging to the Presbyterians, Baptists, and Methodists. As a place of business, it ranks second in this State, Louisville being the first.

It has derived some notoriety from the President's rejecting the bill appropriating money towards making a road from this point to Lexington; the only effect of which veto, we hope, will be, to rouse up the energies of the people of Kentucky to make the rejected road, and all others necessary for the public convenience, in this State.

If we know the people of Kentucky, and we think we do, they will rise up under the pressure of the veto, in every part of the State, and commence and carry into effect, a system of internal improvement, which will do honor to the present population, and be useful to generations yet unborn.

The people of Maysville, for intelligence, industry, enterprise, and sterling patriotism, are surpassed by none in the Union.

The rejected turnpike is in progress, and will be made in a reasonable time. The people along the whole line of this road, are as hospitable, as intelligent, and as worthy citizens, as any in the State. The town of Maysville was formerly called Limestone; and was either the starting point, or the place where many an Indian expedition ended, in early times.

The completion of the Ohio canal will be of vast advantage to this place, where all the hemp and tobacco of the State will be brought from the interior, intended for a northern market. Here, too, the foreign goods for the central parts of Kentucky, will be landed. The country back of Maysville is rich and fertile, and the farmers among the best and most wealthy in the west.

It contains about three thousand inhabitants, and is increasing in numbers, wealth, business, and importance, every hour. A steamboat runs daily between Maysville and Cincinnati.

The situation of the town is high, dry, and healthy. Stone for building is abundant on the spot, and every article used by the builder is plenty, cheap, and good.

It must increase rapidly in all respects, and forever be a town of importance.

Why the authors of maps of the United States have neglected, as many of them have, to notice so important a place as this, seems strange indeed.