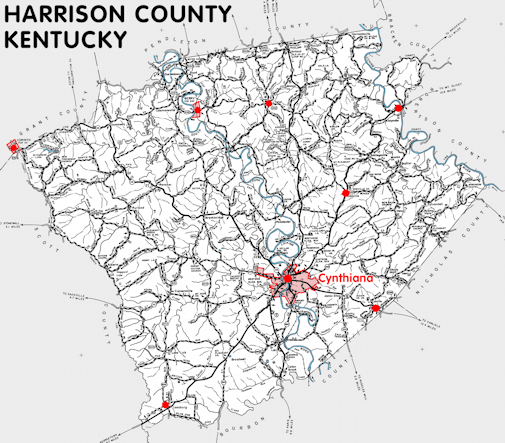 Harrison county is in the Bluegrass region of Kentucky. The elevation in the county ranges from 540 to 1060 feet above sea level.

It was formed in 1794 from Bourbon and Scott counties. The county seat is Cynthiana. Harrison county was a source of Campbell (1795) and Robertson (1867) counties.

The equine population was 3,500 in the 2012 Kentucky Equine Survey.

Harrison county is in the Bluegrass Area Development District.

Harrison county was named for Colonel Benjamin Harrison (born in Pennsylvania circa 1745 and died in Missouri in 1808), an early settler in the area and member of the Kentucky legislature.

The Harrison county area was the home of native Indians from prehistoric times and ancient burial mounds remain. The first European settlers arrived in 1775 at what became known as Ruddell's Station.