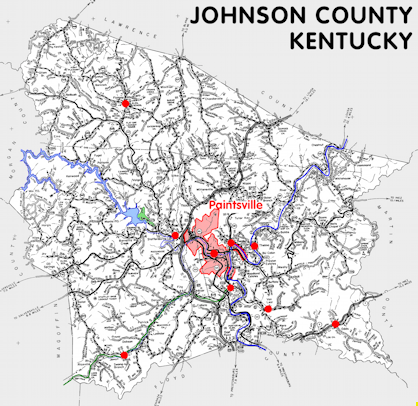 Johnson county is in the Eastern Coal Field region of Kentucky. The elevation in the county ranges from 550 to 1508 feet above sea level.

It was formed in 1843 from Floyd, Lawrence, and Morgan counties. The county seat is Paintsville. Johnson county was a source of Magoffin (1860) and Martin (1870) counties.

The equine population was 700 in the 2012 Kentucky Equine Survey.

Johnson county is in the Big Sandy Area Development District.

Johnson county was named for Richard Mentor Johnson, legislator and Vice President of the United States.

The Dawkins Line Rail Trail runs through the county.