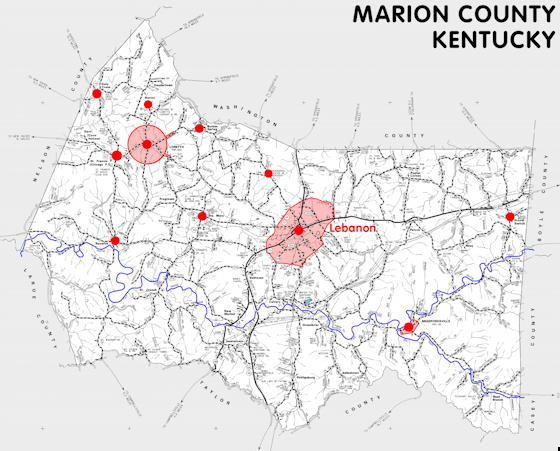 Marion county is in the Western Knobs region of Kentucky. The elevation in the county ranges from 475 to 1260 feet above sea level.

It was formed in 1834 from Washington county. The county seat is Lebanon.

The equine population was 2,000 in the 2012 Kentucky Equine Survey.

Marion county is in the Lincoln Trail Area Development District.

Marion county is was named for General Francis Marion, who served in the American Revolution.

Many early settlers were Roman Catholic and the first Roman Catholic church in Kentucky was built in 1792 in what is now the town of Holy Cross. The Sisters of Loretto convent is also located in the county in Nerinx.

With a long history of whiskey production, Marion county still has a cooperage and is the home of Maker's Mark Distillery, at Burkes Spring outside Loretto.

By some measures, the geographic center of Kentucky is in Marion county, about 3 miles northwest of Lebanon on KY 429.