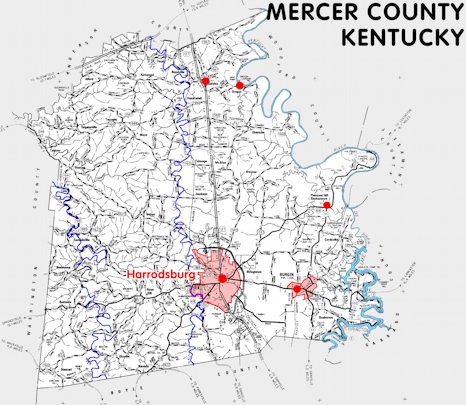 Mercer county is in the Bluegrass region of Kentucky. The elevation in the county ranges from 483 to 1000 feet above sea level.

The equine population was 3,700 in the 2012 Kentucky Equine Survey.

Mercer county is in the Bluegrass Area Development District.

Mercer county was one of the Kentucky counties formed by Virginia in 1785 and was named to honor General Hugh Mercer, a Revolutionary War officer who died from wounds he received in battle in 1777.

Harrodsburg, the county seat, was founded in 1774 by James Harrod and was the seat of Kentucky county, Virginia.