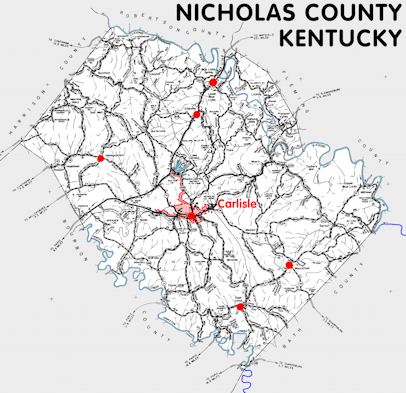 Nicholas county is in the Bluegrass region of Kentucky. The elevation in the county ranges from 565 to 1060 feet above sea level.

It was formed in 1800 from Bourbon and Mason counties. The county seat is Carlisle. Nicholas county was a source of Robertson (1867) county.

Nicholas county is in the Bluegrass Area Development District.

Nicholas was named for George Nicholas, who served in the American Revolution, as Kentucky's attorney general, and the first law professor at Transylvania College. The original county seat was at Blue Licks. It moved to Ellisville in 1805 and finally to Carlisle in 1816.