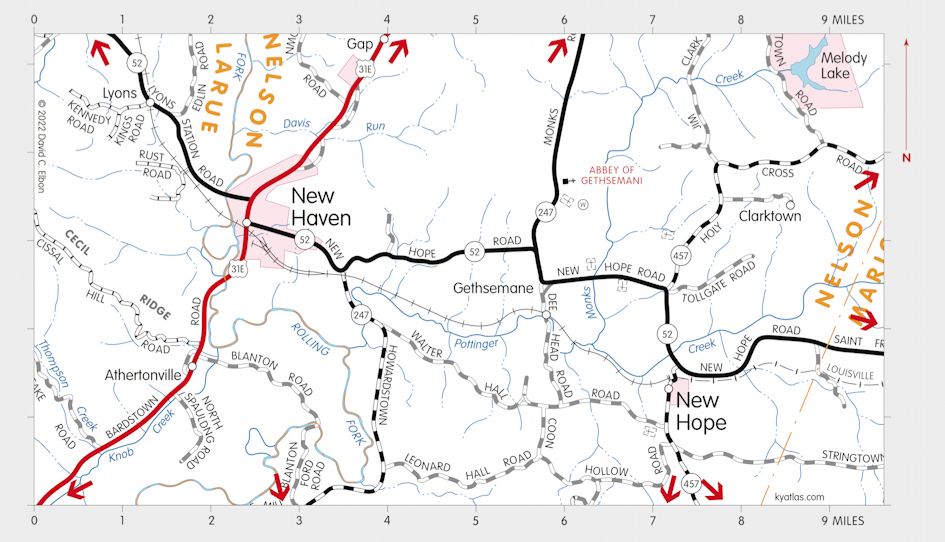 Gethsemani, also spelled Gethsemane, is in Nelson county, about ten miles south of Bardstown. The site of a school established in 1818 by the Sisters of Loretto, it became the home of the Abbey of Gethsemani in 1848. The Abbey is part of the Order of the Cistercians of the Strict Observance, also known as the Trappists. The Trappist post office operated from 1901 to 1983.

South of the Abbey, at the railroad, was Gethsemane Station and a small community. A Gethsemane Abbey post office opened in 1866, the name was later shortened to just Gethsemane, and it closed in 1969.

From William B. Allen's A History of the People Called Monks (1878)

This community is a colony from the Abbey of Melleray, Diocese of Nantez of the Department of Loire-Inférieure, France. The abbot of this abbey, being favorably impressed with the country of the United States of America, resolved if possible to found a house there. He consequently sent two of his most prudent fathers to seek out an eligible site in this hospitable country; the measure being approved by the nuncio, or representative of his Holiness at the city of Paris in France. The nuncio gave to these explorers letters of recommendation to the venerable Bishop Flaget of Louisville, Kentucky, who was a man of great renown, and was even then held as a saint at Rome. The two religious after attaining apostolic benediction set out for Kentucky, the 1st day of June, 1848 by way of Le Havre-de-Grace, and arrived at New York on the 14th day of July, 1848. Reposing in that city a few days, they arrived at Louisville on the 22nd day of July, where they were received by Bishop Flaget with all the affection of a father. They were informed that Gethsemani could be purchased from its owners, who were the Sisters of Loretto: such was the generosity of the Mother Superior towards them that the terms of purchase were soon agreed upon, and met fully the consent of their superiors in France, which had first to be obtained before the ratification would be complete. One of the explorers immediately returned to France, while the other remained in the country to make preparations for the reception of the 45 religious whose speedy arrival was announced by a letter of his superior. The new colony departed from Melleray on the 24th of October 1848. The Reverend Father Eutropius, the chosen superior of the new foundation. Dom Maximus was the Abbot of Melleray, who sent the germ of La Trappe, or monachism, in the New World to disseminate the principles of order and morality which they practiced. Their ship reached the Port of New Orleans in due time, and immediately took passage for Louisville, which place they reached in about forty days from the time of their departure from France. After reposing one day at Louisville, they took their departure for Gethsemani by way of Bardstown on foot, and thence by New Haven to their future home, which in a few days after their arrival became their solitary and peaceful possessions, where their former austere and laborious manner of living was resumed with scarcely any delay...

Farming is conducted in the best and most scientific manner. Every one has his particular duty to perform, and every thing is carried on with perfect order and regularity, joined with great simplicity. They have every instrument of husbandry necessary for farming purposes, and they too, of the most approved model. Large sheds to preserve from the weather when not in use their wagons, carts, plows of different constructions, and all other instruments used in the cultivation of the soil. Large barns and cribs in which much of the products of the farm is stored. Their cellars are capacious also in which is stored barrels of cider, wine, apple brandy, and many other things which they use or sell. They raise a great many hogs, sheep, and cattle, and work in their wagons both horses and mules of which they had a great number before the war. There is to be seen a passing and repassing of the religious, some having on their shoulder gardening utensils: others baskets containing the various articles about which they were employed, all busy and apparently happy and presenting to the imagination the activity and industry of a swarm of bees. You hear the din and noise of agricultural and mechanical industry, without hearing a word spoken among them, for they speak only to their superiors and officers.