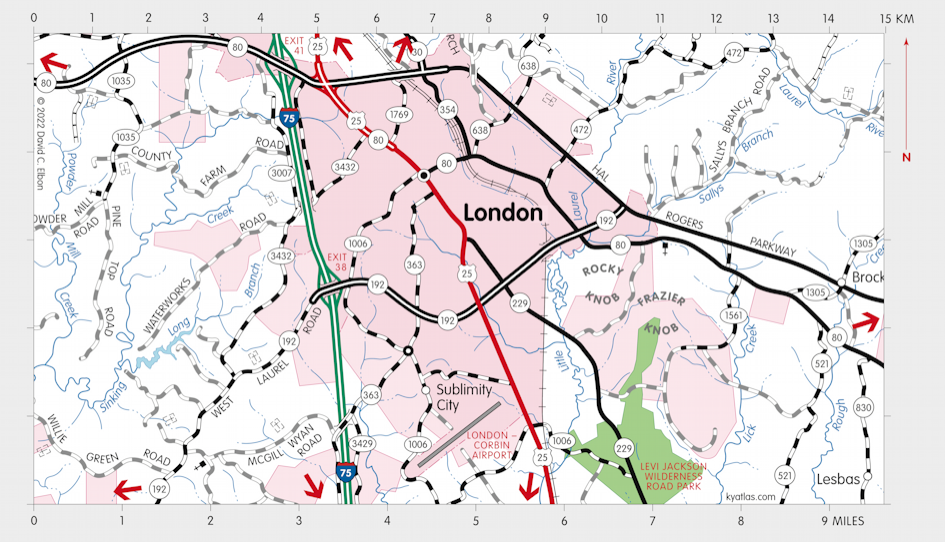 London, the seat of Laurel county, began as a settlement on the Wilderness Road running north from the Cumberland Gap. The town was formed and named for the city in England in 1826. London was incorporated in 1836. The London post office opened in 1831. The population in 2010 was 7,993.

London was the home of Sue Bennett College, which opened as the Sue Bennett Memorial School in 1897 and closed in 1997 because of financial problems.

London has been designated a Kentucky Trail Town.

In 1935 the United States Forestry Service purchased 583 acres south of London in the Sublimity Ranger District for a model farming community. The region had been severely impacted by the depression and many families were living in difficult conditions. The Sublimity Forest Community consisted of 66 farmsteads, each including a wood-frame house, a barn, and other out-buildings on two to 26 acres, and several community buildings. Area families meeting certain criteria could lease the farmsteads. The project was primarily the work of the Rural Resettlement Administration and the USFS, but construction and other functions were done by the Works Progress Administration, the Civilian Conservation Corps, the National Youth Administration, and the Farm Security Administration. The project was ended in 1945 and the farmsteads were sold. Some of the original Sublimity houses are still in use. Some of Sublimity is now within the London city limits.