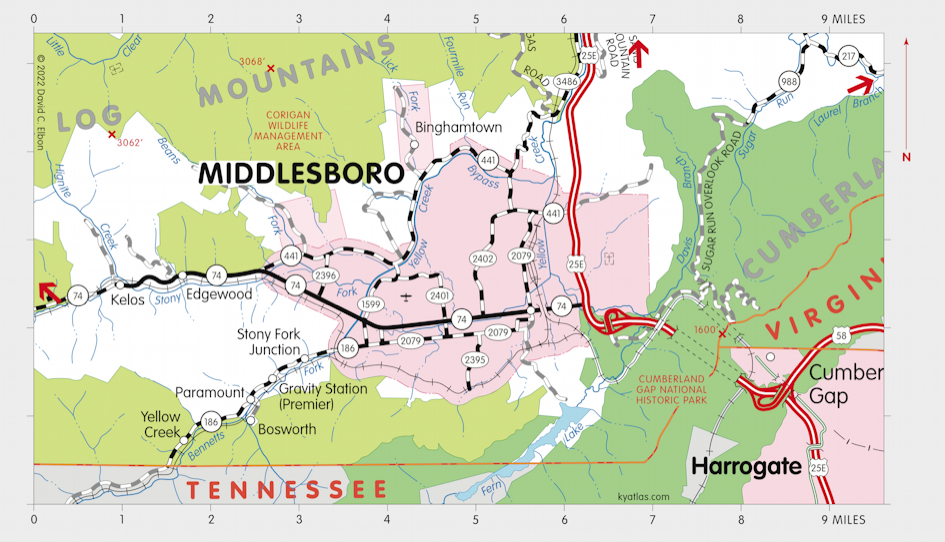 Middlesboro – the Middlesborough spelling is seldom used – is a Bell county city northwest of the Cumberland Gap and about 11 miles south of Pineville. Located on what became known as the Wilderness Road, native people and explorers often moved through the area. Settlement began about 1810 and the area became known as Yellow Creek. In 1889 a planned mining and manufacturing city was begun with European financing. It was called Middlesborough after the city in England. The manufacturing enterprises never materialized and the backers were bankrupt by 1893. Middlesborough was incorporated in 1890. The Middlesborough post office opened in 1888 and in 1894 began using the spelling Middlesboro. The population in 2010 was 10,334. Middlesboro is the largest city in the county.

Middlesboro is in a four mile wide basin between Pine Mountain and the Cumberland Mountains, an astrobleme, that is the eroded remnant of a meteorite impact crater about 300 million years old. The object is estimated to have been about 500 meters wide. The other known astroblemes in Kentucky are at Jeptha Knob and outside Versailles.

Middlesboro is the home of a campus of Southeast Kentucky Community and Technical College.