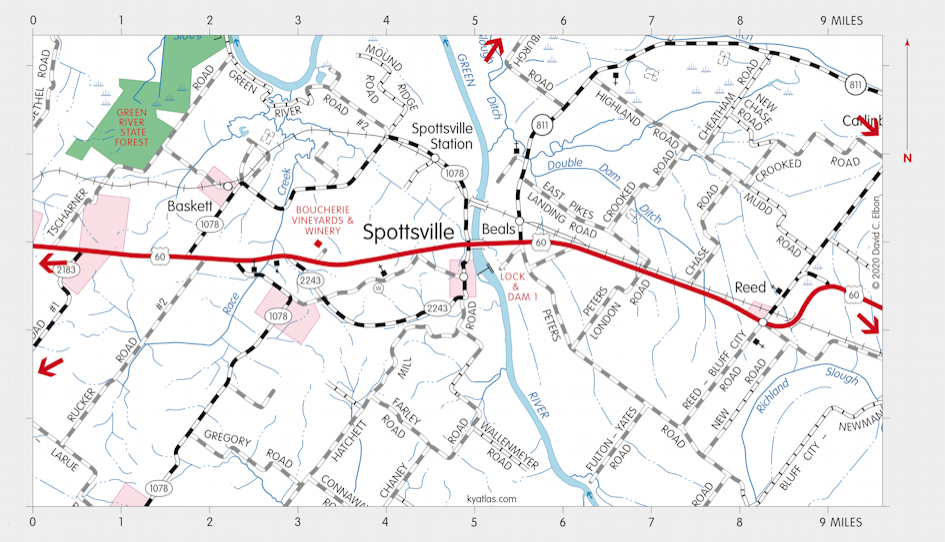 Spottsville is a Henderson county community on the Green River about nine miles east of Henderson. Settlement began circa 1800 and there were mills and other industry, eventually including coal mining. The site was near the falls on the Green River and most early development was on the flats along the river. It was originally known as Knights, probably named for a local landowner, but became known as Spottsville around 1830, named for Samuel Spotts, who purchased land in 1829. It was also known as Shanty and The Locks, named for the Green River Lock and Dam 1 that began operating in 1840. The town was laid out about 1860. Spottsville was incorporated in 1871, but was later dissolved. The Spottsville post office opened in 1858 and closed and reopened several times over the years. The population of the Spottsville census designated place was 325 in 2010.

Green River Lock and Dam 1 is the first of a series on the river than began construction in the 1830s. The original dams were timber crib construction, but some were upgraded over the years. Dam 1 was replaced in 1956. Of the six that were constructed on the Green River four are still in place and two locks are still in operation. Lock and Dam 2, which is still operating, is upstream at Calhoun.

The four original locks and dams were built by the Commonwealth of Kentucky, but their condition deteriorated and after the Civil War they were sold to the Green and Barren River Navigation Company, which operated them with tolls until 1888. They were then taken over by the United States Army Corps of Engineers which built two additional locks and dams upstream.