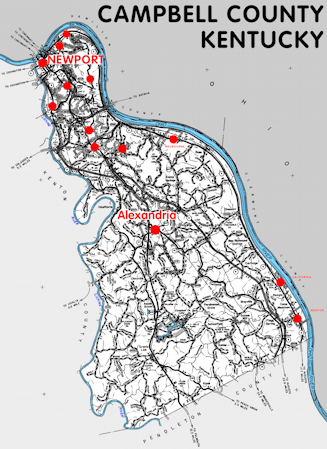 Campbell county is in the Outer Bluegrass region of Kentucky. The elevation in the county ranges from 455 to 920 feet above sea level.

The equine population was 1,800 in the 2012 Kentucky Equine Survey.

Campbell county is in the Northern Kentucky Area Development District.

Campbell county was named for John Campbell, an early Kentucky land owner and member of the state legislature.

The initial county seat was Wilmington, now known as Burlington and in Boone county. In 1797 it was moved to Newport, then in 1823 it was moved to Visalia, now in Kenton county, back to Newport in 1824, and then in 1840 to Alexandria, although some functions remain in Newport.