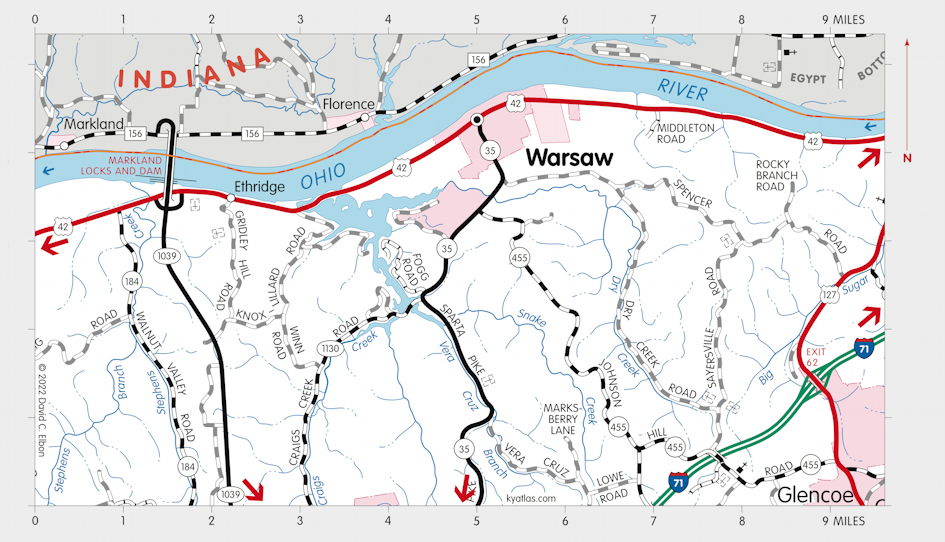 Warsaw, the seat of Gallatin county, is located on the Ohio River. The area was settled around 1800 and was first known as Ohio River Landing, Great Landing, and Johnson's Landing. The town was established as Fredericksburg in 1814, possibly named for Adolphus Frederick, a local boat builder. It was renamed Warsaw in 1831 to avoid confusion with the Washington county town of Fredericktown. The name Warsaw came from the novel Thaddeus of Warsaw by Jane Porter. (The city of Pembroke in Christian county was named for a character in the novel a few years later.) Warsaw became the county seat in 1838 when Carroll county was formed from Gallatin county. Until that time the county seat had been Port William, which was renamed Carrollton in 1838.

Fredericksburg was incorporated in 1831 and Warsaw in 1833.

The Fredericksburg post office operated from 1816 until 1831, when it was renamed Warsaw.

Near Warsaw was the Ohio River Lock and Dam 39, located at about the same place as the current Markland Locks and Dam, which replaced the old dam in 1964. The upstream dam 38 was near Belleview. The downstream dam 40 wasn't constructed, made unnecessary be the increased height of some of the dams. Dam 41 was at Louisville.