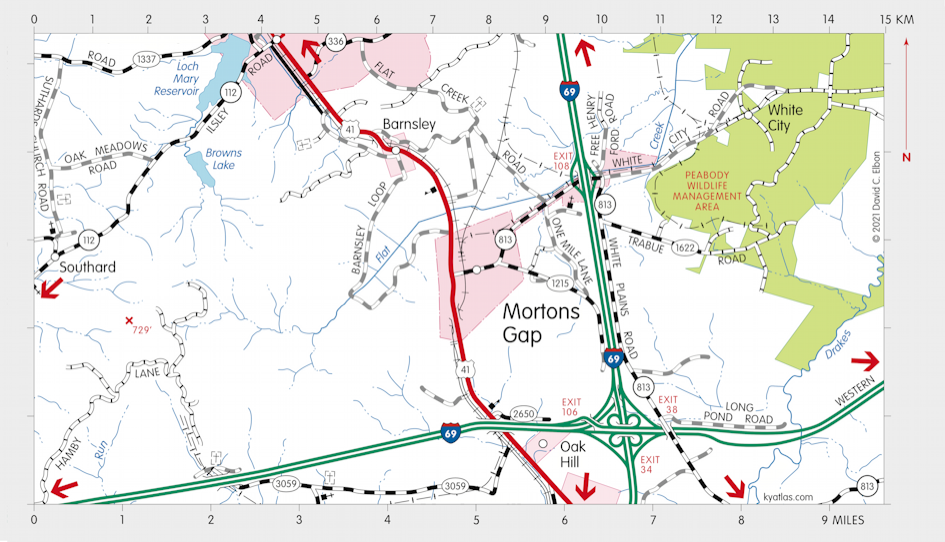 White City was a Hopkins county town about seven miles southeast of Madisonville. It was a mining camp built by the Hart Coal Corporation, which was headquartered in nearby Mortons Gap. Hart purchased the mines in the area from the Kingston Coal Company in 1920. Underground mining was employed at that time, but the area was later strip mined and nothing remains of the town. The site is now within the Peabody Wildlife Management Area.

One of the Hart Coal Corporation’s Locomotives, Showing the Power House and Double Tipple at White City.

While no apparent expense has been spared by the management in the complete equipment of its properties both above and below ground, equal attention has been paid to the comfort of its several hundred employees at White City, where the “Moss Hill” coal is mined and prepared. As the name implies it is a “white” city, and so far as the writer knows the only community in Kentucky where colored residents are not permitted.

None but Americans are employed at the company’s various collieries and none but white men at White City. The town is attractively located in the prettily wooded hills of that portion of Hopkins county, and in the construction of its 150 dwellings at this place together with the commissary, schools, churches and other buildings that go to make up a model community, the management has displayed a keen insight into the comfort of its employes. It evidently has demonstrated the theory that a contented workman is a good workman.

The company pays special attention to the sanitary condition of its camps and is not unmindful of the importance of an abundant supply of pure water; yet the owners of the property are a duly incorporated company with a capital stock of one million dollars. As a selling organization it is equally as efficient as an operating company and it has unexcelled facilities combined with unusual railroad connections for distributing and marketing its output of more than 1,000,000 tons per year.