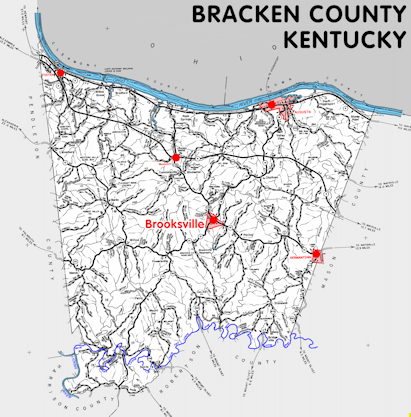 Bracken county is in the Outer Bluegrass region of Kentucky. The elevation in the county ranges from 455 to 980 feet above sea level.

It was formed in 1797 from Campbell and Mason counties. The county seat is Brooksville. Bracken county was a source of Pendleton (1799) and Robertson (1867) counties.

Bracken county is in the Cincinnati metro statistical area and the Buffalo Trace Area Development District.

Bracken county was named for William Bracken, an early settler. The first county seat was at Augusta, but it moved briefly to Oxford (1800 to 1802), the location of which is not known, back to Augusta, and finally moved to Woodward's Crossing, now known as Brooksville, in 1839.