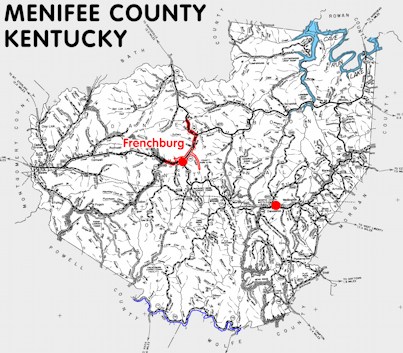 Menifee county is in the Eastern Coal Field region of Kentucky. The elevation in the county ranges from 670 to 1428 feet above sea level.

It was formed in 1869 from Bath, Montgomery, Morgan, Powell, and Wolfe counties. The county seat is Frenchburg.

The equine population was 900 in the 2012 Kentucky Equine Survey.

Menifee county is in the Mount Sterling micro statistical area and the Gateway Area Development District.

Menifee county was named for Richard Hickman Menefee, who had been a congressman from the area. (The change in spelling was apparently the result of an error.)

Much of Menifee county is within the Daniel Boone National Forest, including part of Cave Run Lake.