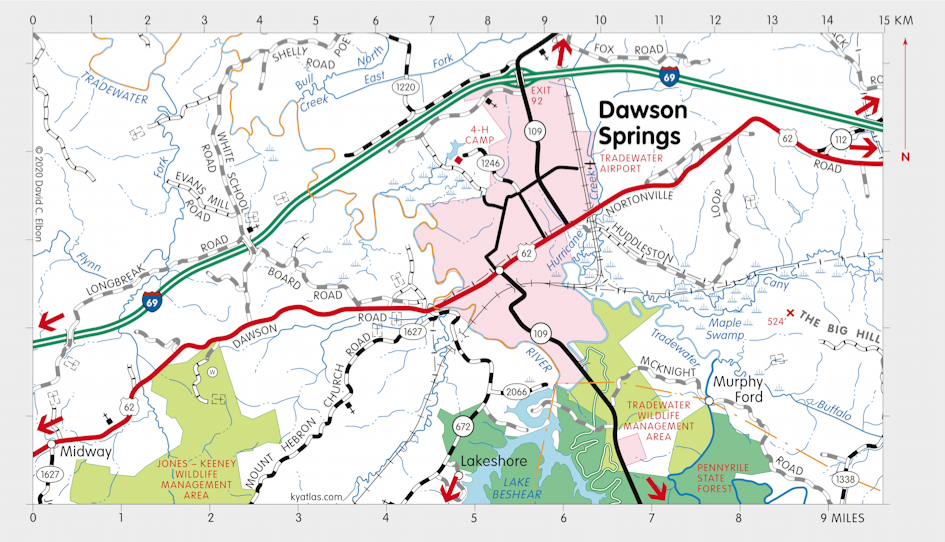 Dawson Springs is a city in Hopkins county (extending into Caldwell county) on the Tradewater River about 11 miles southwest of Madisonville. An early nineteenth century settlement was known as Chalk Level or Chalklevel. The site was also known as Tradewater Bend and when the Elizabethtown and Paducah Railroad arrived in 1872 it established the Tradewater Station. It was later renamed Dawson, for the owner of the land, and after mineral water was found circa 1881 it became known as Dawson Springs. (The water came from wells, but the name Dawson Wells wasn't popular.) It was a busy resort community into the early twentieth century. Dawson City was incorporated in 1882 and was renamed Dawson Springs in 1898. The Chalk Level post office opened in 1848 and closed in 1867. The Dawson post office opened in 1872, was renamed Dawsonsprings in 1896, and Dawson Springs in 1925. The population in 2010 was 2,764.

Dawson Springs has been designated a Kentucky Trail Town. The Pennyrile Nature Trail, a hiking and mountain biking trail, connects Dawson Springs with the Pennyrile Forest State Resort Park, about 12 miles away.