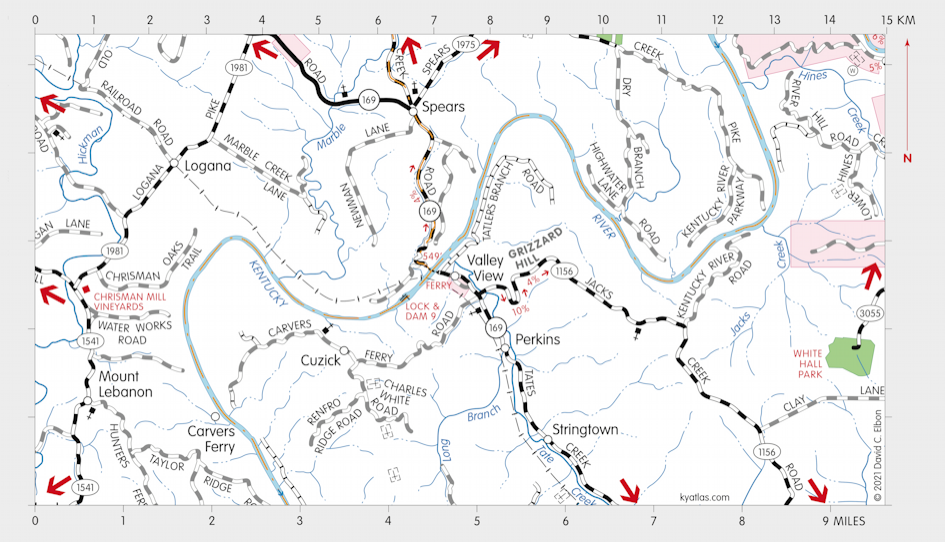 Valley View is a Madison county community at the mouth of Tate Creek on the Kentucky River about 12 miles northwest of Richmond. The community grew around John Craig's ferry, which began operating in 1785. There were mills and other businesses in the early nineteenth century, but they were destroyed by floods and fires. The town was laid out in 1891 and became a center of lumber production, using logs brought down the river from eastern Kentucky. The lumber business declined and the sawmills closed circa 1930. The name Valley View is thought to come from the view from the top of the hill on the Fayette county side of the river. The Valley View post office operated from 1891 until 1957.

The Valley View ferry, seen from the north side of the river.

The Valley View ferry, the only Kentucky river crossing for many miles, is the oldest business in Kentucky, having been granted a franchise by the Virginia assembly in 1785. It is now owned by Fayette, Jessamine, and Madison counties and operated by the Valley View Ferry Authority.

Valley View was once served by the Richmond, Nicholasville, Irvine, and Beattyville (RINEY-B) Railroad, which arrived in 1888. The piers that supported the railroad bridge over the river are still standing.